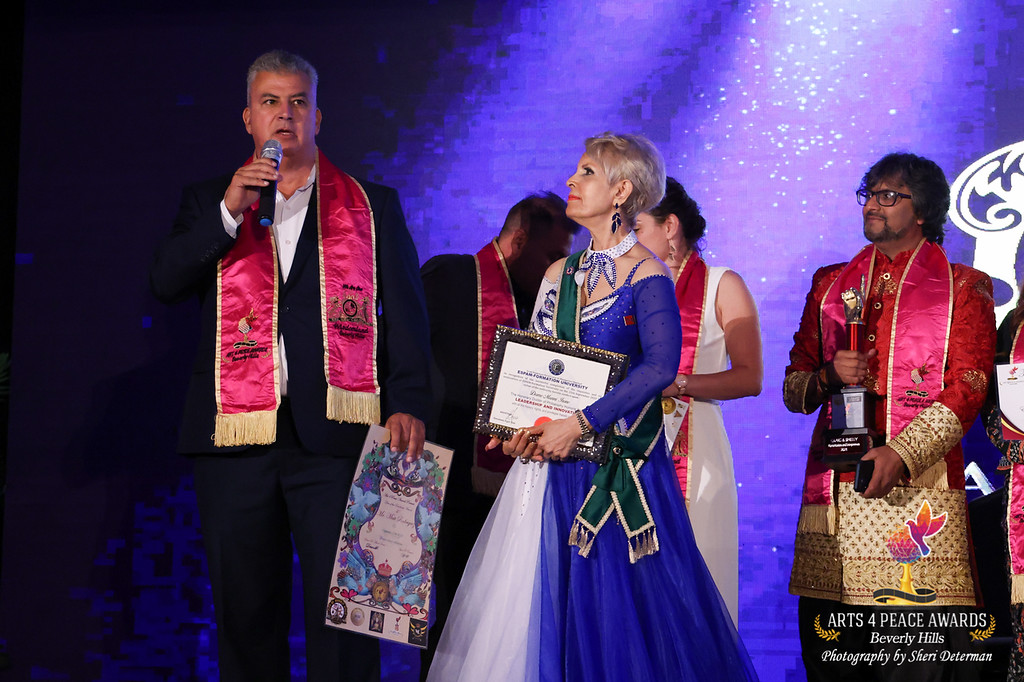 San Diego (USA): Dame Munni Irone recently concluded Art 4 Peace Awards 2021 at the Westin Resort Carlsbad in San Diego. Art4Peace is a non-profit organisation that raises funds by selling art for the poor and the betterment of society. The organisation reaches places in the city, states, and other impoverished countries, including Ghana, Haiti, and India.

Instituted by Dame Dr Munni Irone, who has provided global services for the past 40 years, the Art 4 Peace Awards felicitations have been celebrated annually since 2016. The Art4Peace, the non-profit organisation, is funded mainly by her finances and donations from charitable people and organisations.

Dame Dr Munni Irone founded and instituted The Arts4Peace Awards Art4peaceawards.org in 2016, with the simple aim that “success comes when we serve.” The organisation wishes to bring about a global change and produce leaders via the Arts and through Wisdom. The tenets are Non- violence, Wisdom, Love and Peace. The purpose of awards is to demonstrate to every nation the importance of culture to the whole fabric of the world, and by showcasing through art, we understand and experience the love and Wisdom and the creative minds and hearts ushering in a pathway to peace.

The awardees present at the event were national and international guests who were honoured and felicitated.

Mr Matt Rodriguez – the candidate for LA Sheriff, was awarded the Hero of the Pandemic to install peace in the police force and provide emotional, spiritual, and mental support. He aims to increase wages, provide education for a more educated workforce, and educate the public on the importance of the police in providing a safer community environment.

Mr Jude Elie – presidential candidate for Haiti and mayor Dr Michael Vo- were the Chief. Guests of Honor for the evening.

Mr Elie collected $200 million in goods for his country, ushering in a vision for New Haiti in collaboration with the Opposition for a united Haiti. Mr Matt Rodrigues (LA Sheriff candidate) will be visiting Haiti for the distribution.

Mayor Michael Vo from Fountain Valley, Orange County, received the Hero of the Pandemic Royal. Award and was also awarded an Honorary PhD.

Ms Lily Lisa received the Woman of the Year Award for her help with the unfortunate and downtrodden. She received the customary Chinese Red Envelope.

The Best Latina Film went to Expiacion, and the Mexican Actress Award went to Ms Vicky. Conteras. Craig & Shelly were the winners of the Entrepreneur of the Year Award. They also sponsored the Art 4 Peace Awards 2021.

Dame Dr Munni Irone is an entrepreneur, philanthropist visionary, author of 7 books, Qigong practitioner, celebrity coach, global speaker and a green activist since 1979. She serves people and the planet. Dame Munni has won 75+ awards and 35 Medallions; she is the Philanthropist Queen of Beverly Hills. Dame Dr Munni Irone received her 3rd honorary doctorate at the ceremony. Dame Munni is also the founder of WorldwideYouthCongress.net, BeverlyHillsImportExport.com, BeverlyHillsLuxeCollections.com besides art4peaceawards.

Dr Penelope Aphrodite Foskaris is a humanitarian, mother, nutritionist, Lifecoach, and health coach. She has spent her life making this world a better place to live in. She has helped people with depression, PTSD, homelessness, abuse, human trafficking, nutrition, etc. Dr Penelope helps orphanages in Ghana and India. She runs an Anti-Aging Center in Anaheim Hills, California. Dr Penelope is an Ambassador for the Worldwide Youth Congress founded by Dame Munni Irone.

Minister Avital was honoured and decorated as the official Minister for Commerce for WorldwideYouthCongress.

Mrs Abi representing Nigerian University, was part of decorating the awardees.
Ms Bonzie William, Vice President of Art4Peace Awards, was given for providing security for the VIP guests.

Mr Gary got Awarded for the exceptional custom-made stretch Bentley limousine.
Musician Shalom was playing the accordion and ushering for the guests.

This story is released by worldmedianetwork.uk 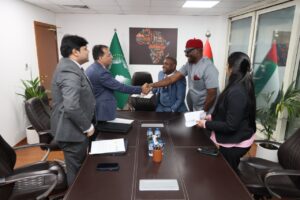 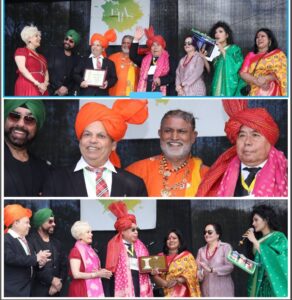 “Bharat Mahotsav” Festival of One India at Oslo, Norway 2022